The temperature has begun to dip here in Minnesota. The temperature drops, the wind picks up, and the red and golden leaves of autumn have been replaced with bare branches against stark gray skies. It all serves as a reminder of life’s temporal nature. The ups and downs, the winding road we all travel together, the time upon this spinning blue marble is tragically short.

I received a voicemail recently that contained a message I had been expecting for some time. It was in my mother’s voice, choked with sadness and soaked with tears.

Baby, our family dog residing with my parents in California, passed away. 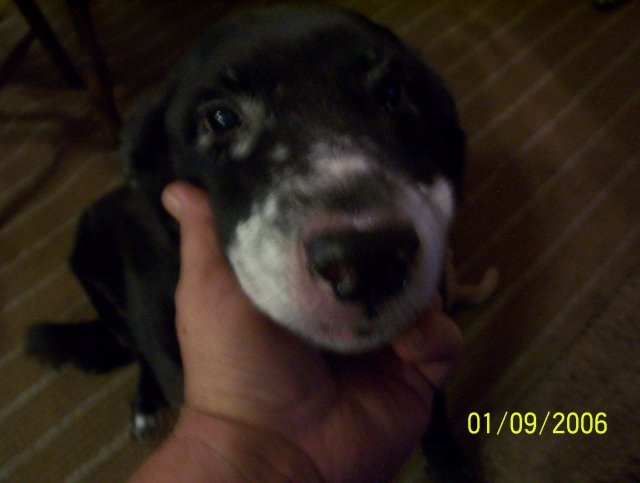 Years and years ago (I say this because I don’t know exactly how long we’d had Baby in our lives, as it felt like forever), my father brought home a small black pup covered with fleas who were bloated and slow with blood. He held her up to my mother, who replied with a simple “No.”

He made some comment about her big puppy eyes, she still replied “No.”

He told us of how he had saved her from a pair of children who had, each holding a pair of legs, been pulling her back and forth, fighting over who would take her home. She hesitated, but remained firm: “No.”

Finally, he offered the following deal: “We’ll take her to the vet to get checked out. We’ll get these fleas off of her and if she gets a clean bill of health, sans fleas, we’ll keep her. If, however, there’s some sort of medical issue that would end up costing us a lot of money, we’ll take her to the pound. Deal?”

My mother hemmed and she hawed and she looked into the eyes of the pathetic little beast still being held before her face and she said “Fine.”

After the vet looked Baby over, he declared she was relatively healthy, gave us something to clear the fleas away and sent us on our way, with our brand new puppy.

I moved away roughly four or five years ago, but my regular calls back home would always include an inquiry of Baby’s condition and general well-being. For most of that time, my questions were met with “Oh, she’s still fat.” Or “She’s still hogging your mother’s chair.”

But more recent calls have revealed Baby being diagnosed with canine lupus, a condition that is very treatable, yet still rough to live with, especially at her age and weight (she was always a tubby little thing, likely due to our generously sharing our “people food” with her).

One morning, my father awoke to find that she was in far too much pain to ignore. It was a slow build up, a gradual process of deterioration due to the lupus matched with a gradual dosing of medication meant to fight the damned disease, but it finally became too much and she made it clear to my father.

Baby was always a very intelligent dog. She would accept and (mostly) follow directions given to her in plain English.

“We’re going to be gone for a few hours. If you’re good, we’ll bring you a goody.”

The floor would be spotless, nothing would be disturbed, Baby would be right where we left her.

“No peeing on the floor! Bad girl!”

The next day, she would pee on the carpet instead.

“So-and-so is coming to visit. Don’t bark at him/her or you won’t get a treat.”

So-and-so would be greeted, not only by a quiet dog, but a quiet dog who would share her toys with them.

She had a series of stuffed animals, we called them her “babies”, they ranged from a tiger to a sheep, and she knew each one by name.

“Go get your tiger baby!” would see her fetching her tiger. Say “Bring me your sheep baby! Where’s your sheep baby?!” and she would respond by dropping her sheep on your foot.

That morning, my mother fixed her a breakfast of hot dogs (one of her favorite foods, and a sort of farewell meal) and told her to let them know when she was “ready”.

After a while, she sat by the door and my parents drove her to the vet, who then got down on the floor with her while he gave her the injection that would relieve her of her pain.

When I heard the voicemail, I immediately called and spoke to my father, who explained the details of what had happened. It was a brief conversation, as I was overwhelmed. I cried a lot that night and I slept much of the next day away. I’m still not over it, though I’ve dealt with it as best I can. I’m able to remember her and laugh now, rather than cry, but it’s still very hard and I’m not sure when, if ever, I’ll not still feel a great sadness for not being there when she passed.

The whole thing has reminded me of another family dog of ours, who had the glaringly original name “Puppy” (later changed to “Big Dog”, for obvious reasons), and who was also put to sleep. It was long ago, when I was a very young child (I can’t even properly guess at an age, but it was one of the first times I’d been faced with death), and I’ve never truly gotten over it. Though I can now think back with love and laughter, rather than pain and sadness. I worry that this is due to my being present for Pup’s death, a sense of closure I’ll never feel in relation to Baby.

I’ll live on, as we all will. Some may read this and think “Jesus, it was only a dog”, but they’re wrong. As clichéd as it sounds, she was very much a part of my family and a part of me. No, she IS a part of me, and always will be.

I won’t lie, I cried while writing this. But even now, I open the photo of Baby hijacking my mother’s favorite chair, her rotund pink belly the most prominent thing in the picture, and I laugh.

I’ve a cold. I mean, that’s not a happy thing, but it’s a true statement. Coughing, sniffling, the whole bit. But it’s okay, as I’ve also got a wonderful family and wonderful friends/co-workers to take my mind off of things.

In case you were wondering:

*- My Thanksgiving consisted of a prepackaged pot roast cooked to near perfection by me, many many mashed potatoes (TOO MANY POTATOES), and playing a lot of Dragon Age: Origins on the accursed X-Box.

*- Speaking of Dragon Age: Origins, it is a wonderful game and has stolen many hours from me. But I don’t mind, as those hours were spent having fun.

*- I still don’t know what I want for Christmas, and by that, I mean I want far too many things and simply cannot seem to dwindle the list down.

*- I have decided that I need to either order the Sundance Channel or purchase the first season (and later, second season) of Spectacle: Elvis Costello With, which is an amazing television program in which Elvis Costello essentially sits down with a bunch of God-like musicians and chats them up for awhile. Did I mention the chats are often interrupted by jam sessions? Think about Elvis Costello singing with Bono and The Edge of U2. Think of him performing with Elton John. These, and many more, occur on this program. Thus, I must own it somehow.

Danielle, as I’ve written here about, has a form of Fibromyalgia. My boss also suffers this horrible syndrome and has run the gamut regarding medications to battle it. She’s finally found something that works wonders, a drug called Savella, and she was kind enough to pass word of it on to us.

We rushed to the clinic, got a sample pack of it, and she began taking it immediately. It’s done it’s job and it’s made living with Fibromyalgia much easier for Danielle, and so we returned to our doctor and requested a prescription. There was a moment when the concern of it not being covered by insurance arose (it’s $106 a month when not covered), but we’ve just been informed that it is covered by a co-pay that will allow us to get it for around $70 a month. It’s still very steep, but it’s much better than $106 and it’s something that we can juggle our budget and finagle a few of our bills around until we can manage getting it. Because it’s definitely worth it.

This is Beck (and Feist!) covering a Skip Spence song. If you’ve never heard the original, you should try and track it down online because it’s beautiful.

Speaking of Feist, here’s a live version of “Secret Heart”:

I’ll be starting a new religion very soon, the basis of which being that Morrissey is, in fact, the physical manifestation of God. Worship below:

And finally, here’s a fantastically interesting clip from an interview of Bob Dylan in which he talks about fame, fans, and draws a picture of the guy interviewing him:

A list of places I currently call my internet home(s):

I’m off to convalesce on the couch and wait for my reason for living to come home.

2 thoughts on “Some Good, Some Bad, Very Cold”